It's A Small World ... Espeically in Italian Neighborhoods 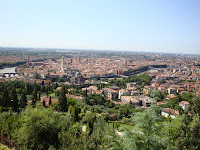 Commuting is a foreign word to most Italians. Not just the word itself, but the idea. You live in a neighborhood. You work in that neighborhood. You shop in that neighborhood. You play in that neighborhood. You vacation at the beach, but other than that - you stay really close to home.
I have to pay my rent at my landlord's bank. There are two branches in this area and I chose the one with the prettier building. Priorities, you know.
The first time I went it was 1:22. First you have to get bussed into the building. You're then held in a little room. Stand on the two foot prints in the middle of the room and start into the camera. Maybe they'll let you in. Buzzzz. I'm in! But, I'm told that pausa (the afternoon break) began at 1:20 and so I'll have to come back. No worries.
Second time 5:31. I had checked the sign for it's hours. But in my head 16:30 for closing time was remembered as 6:30 and not 4:30. On to attempt number three.
The next day I get in through the first door. Through the second. And actually sit down at a desk. But, I don't have one of the papers I need.
OK. Here I finally am! The ball is rolling. We're filling out forms, trying to muddle through my incoherent Italian... when we get to the address part of the form, Mr. Banker says, "Via Cesiolo 18 Building B." My eyes grow big. I didn't tell him that. How does he know? Should I be creaped out? He says, "I've seen you in the garden. I live right by you."
OK. That makes me feel a little better. But, also, I'm thinking - do I really stick out as an American?
I need to pay my "condo fee" but don't know where to go, so I ask him. He calls his wife and she says she'll find the number for where I need to go and will bring it by my apartment. They know which apartment is mine?
On Friday night, I was out on the balcony and who did I see in the garden right below my house? Mr. Banker. He was hunting for his cat. So, I asked, "Where do you live?" Right there, he kept saying. As in Right There. As in our balconies are side by side. As in we share a common wall. As in I've knocked on their door but have never found them home! He's my neighbor! Yipppeeeee.
I'm so excited just to know who my neighbors are... but also, they have already proven their helpfulness and kindness. What a blessing! I'm so thankful the Lord sent me to that bank at that time at that desk for that Banker.