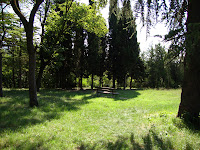 When I'm retelling a conversation in English, one that was said in my poor Italian, I might say, So, I said, Mirianna, what was something difficult that you didn't expect when you lived in Turkey? When, in reality, I said, "Mirianna, in Turkey difficult because not you know, you think?"
It works both ways - I remember what I wanted to say... and even what I just thought I heard. So, remember that conversation I had with the banker? The one where he said he lived close by and has seen me in the garden. Umm... I don't really know that that is actually what he said. He might have said, "Yes, my wife and I are your next door neighbors who live in #2 and we've passed by you in the garden."
Even though it's true in my elementary state in Italian... it's true in English.
I remember what I think I was saying.
I remember what I think was said.
It's called miscommunication.