This Death is Killing Me 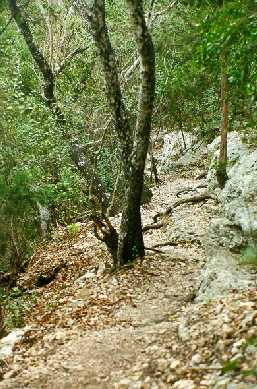 For we know that our old self was crucified with him so that the body ruled by sin might be done away with, that we should no longer be slaves to sin.
Romans 6:6

Co-Crucifixion. Have I made this decision about sin - that it must be killed right out in me? It takes a long time to come to a moral decision about sin, but it is the great moment in my life when I do decide that just as Jesus Christ died for the sin of the world, so sin must die out in me, not be curbed or suppressed or counteracted, but crucified. No one can bring anyone else to this decision. We may be earnestly convinced, and religiously convinced, but what we need to do is to come to the decision which Paul forces here.
Oswald Chambers

I went on the hardest hike I've done yesterday. It is described as "cliffside" which is the right description. It was a lot of work. This whole getting-into-shape-reigning-in-my-eating-habits journey had been hard. And as I've been working and sweating and practicing self discipline, I've asked the Lord to kill parts of me. I literally put my hand someplace I'm not happy with and ask God to cause that area to die... but not only the fat cells and the pounds but the laziness and the emotional eating. And it's been hard. Of course it is. No one's surprised by that. I'm not surprised by that. Everyone talks about it. Everyone knows that it's a tough thing to do.

I've been faced with my sin lately. Really burdened by it. Frustrated by it. Saddened by it. Angry at it. Angry at myself for not being able to conquer it. Why can't God just release me from it? I pray. I have faith. And it's still there.

Yesterday on my hike, I was going down the steep rocks thinking, "Hmmm... I'm glad I'm going down right here. Someday when I'm stronger I'll have to come up this way." A while later I got turned around on an internal circular path. I walked around that circular path three times before giving up. The only way out was to head back the way I had come. So I did it. I turned around and in exhaustion climbed those same steep rocks. And it was hard. Really hard. But it was possible and really worth it because for me, it was the only way out.

As I climbed the Lord asked me a question, "If it takes so much work for your physical body to die then why do you think dying to sin should be easy?" Chambers says it has to be crucified. I don't want to excuse it, justify it, ignore it, hide it, forget about it or fix it. I want to crucify it. I want to bring it out into the open and kill it.

It will be hard. But it's the only way out.

Tara said…
oooohh that is some deep good stuff!
9:30 PM